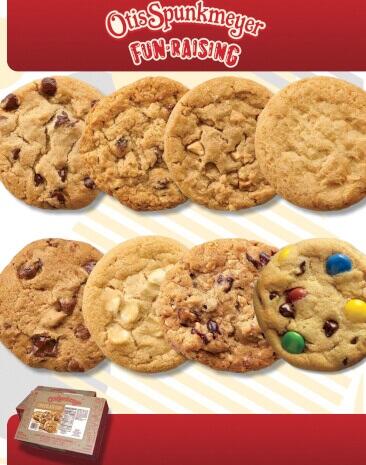 Get your free brochure
Start a fundraiser 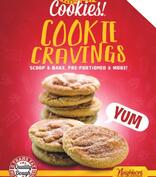 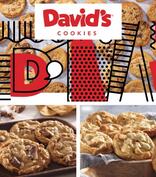 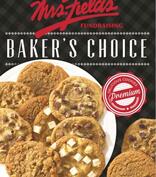 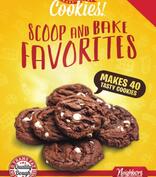 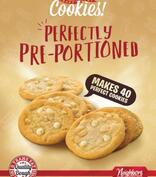 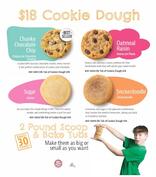 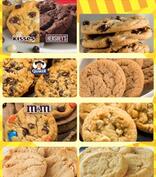 Delivery went very well and we were extremely pleased with how organized everything was. The only issue we had was with FedEx delivering a day late. All of our volunteers and parents were ready for pick up and then we found out last minute it wasn't showing up. Otherwise, we had a very successful fundraiser and look forward to doing business again with you in the future!

This was pretty straight forward. Easy to start and came all organized and labeled.

Answer all my questions in a timely manner. All items where pack very well. Very nice people. Always made sure everything was ok.

Great! Easy to get questions answered and complete the sale.

Our experience with your company was outstanding! Well organized from start to finished and out of all our orders (there were a TON) we only were missing 2 boxes of dough. I was so impressed and will certainly be looking to organize another fundraiser with this company in the future. Thank you for making it smooth and easy!

How do we raise money?

Do participants get a brochure to show?

Is money collected up front?

They also have the option to pay using their phone. (These orders still need to be written on the order form)

Are there any fees?

There are no setup fees or supply costs to start an Otis Spunkmeyer cookie dough fundraiser.

Yes. Our prize programs are optional but recommended. You can boost sales by incentivizing your participants. It’s important to discuss your incentive plan at your kickoff meeting. Then, continue to remind your participants about your prizes throughout your campaign. This will keep them motivated to sell.

There is no cost for our incentives.

Learn about our prize programs

How soon can we start?

After you submit our start a fundraiser form you’ll receive an agreement to sign. It will then take at least 7-10 business days to process your order and pack and ship out your supplies.

Learn about our timeline

How long is the fundraiser?

Your sale lasts for 2 weeks. You can always change your end date. Simply let us know before your sale is over.

Can we also raise money online?

Yes, online selling is an important part of your Otis Spunkmeyer cookie dough fundraiser. Prior to your start date you’ll receive instructions so your participants can register. Once registered they’ll be able to invite friends and family to shop at your store.

Selling online adds a 2nd way for your group to raise money.

Your online store will include additional items not found in the brochure.

Do participants need to register?

Registration is the most effective way to generate Otis Spunkmeyer cookie sales online. Once registered, participants can invite friends and family to your online store using text, social media, and/ or email. They’ll also be able to log into their sales portal anytime and track their online sales.

Once potential supporters arrive at your store, the participant’s name and group appear at the top of the page. This helps to personalize your fundraiser. For example, “Thank you for supporting John Doe with ABC High School Band!”

Registered sellers will also be eligible to earn credit towards prizes. We encourage groups to supplement our prize program with their own rewards. This can bring in even more sales. Here are some incentive ideas.

Do we get our own link?

There are 2 ways to promote your store:

By promoting a direct link, you will only be able to track online sales as a group, not by individual sellers. As a result, participants would not receive prize credit for selling online.

Another limitation with a single store link is getting items to online customers who choose the ‘ship to group’ option. Normally when participants register and send out their own unique links and customers make a purchase, orders are automatically tied to a particular seller.

Any items then ship to the group already packed inside the seller’s box with their other brochure items. Participants then deliver these items to their customers.

But with the single link option, you will need to let any ‘ship to group’ buyers know to pick up their order because it won’t be associated with any seller.

Can we accept donations?

Yes, Otis Spunkmeyer can be set up to accept donations. You make 70% of the donated amount. You have the option to turn this feature off when logged into your portal.

Donations do not count towards items sold.

Can buyers credit more than 1 participant?

Yes. Buyers can choose to support more than 1 participant. Before continuing to the store, supporters would need to select a participant. Then choose the ‘Support another seller’ link to add another participant.

However, participants themselves need to register individually. Each participant has their own login and sharing options.

Is there a minimum order?

There are no order requirements for a Otis Spunkmeyer cookie dough fundraiser.

How much money can we make?

You’ll need to know your group size as well your participant goal. Here’s how you can estimate your profit:

Keep in mind, our example is only an estimated profit. In reality, participants probably won’t sell the same number of items. In addition, the average retail dollars sold per seller will vary.

Can we track our sales?

Brochure: You probably won’t know how many orders you get until you collect your order forms. But there are strategies that can give you a ballpark idea. Learn how to track your fundraising progress

Online: You'll be able to track online sales in real-time. By logging into your dashboard you'll see:

How do we receive our money?

Brochure Sales: Money and order forms are turned in at the end of the sale. The money gets deposited in the group’s account and the order forms are sent in for processing.

Once orders are processed, the group receives their sales reports and invoice. The group sends a check for the invoice amount and keeps the rest as profit.

Online Sales: We deduct your online sales profit from your invoice. If you raise more money online, we’ll send you a check for the difference.

Donations: Any profits from donations are deducted from your brochure invoice.

What is our profit?

Groups make 40% off of all brochure and online items.

You receive 70% of online donations.

What about sales tax?

Certain states require that we collect and remit sales tax on your behalf to your state’s department of revenue. We will need to charge sales tax if your state has determined that we have established nexus and you are not tax exempt. See our brochure fundraising tax guide for more information.

How soon do we receive our order?

We deliver brochure orders to your group 3-4 weeks after receiving your order forms. Online orders generally ship to customers within 3 business days after purchase.

Where do orders ship to?

Product ships out of our Indiana warehouse to all lower 48 states.

How is our order packed?

Is there a shipping fee?

Fuel Surcharge:To account for fluctuating fuel prices and the cost of transporting goods, a 50¢ per item fuel surcharge will be added to your invoice.

Online Sales: Customers pay a shipping fee at checkout to have their order shipped direct to them. Free shipping on all orders over $99.

Buyers also have the option to ship their order to the group. In this case there is no shipping fee but buyers pay a 5% processing fee to have their order shipped to your group.

Do you ship orders to sellers?

There is no ship to seller option available for an Otis Spunkmeyer cookie dough fundraiser.

How are product issued handled?

If you have any items that need replacing, you’ll need to submit a form that we’ll attach to your delivery notice email. Sellers will have 7 days to report any missing or damaged items. Groups are allowed 1 submission per fundraiser.

There’s a reason Otis Spunkmeyer cookie dough has been the exclusive supplier of large retailers like Subway restaurants and Burger King for several years. Not only has it grown to become the number 1 selling brand in food service cookie dough in the United States, but Otis is the top selling cookie dough in fundraising as well.

The parents of today’s children can remember their Otis Spunkmeyer fundraiser for their school. The brand has partnered with large school organizations like DECA (Distributive Education Clubs of America) since 1987.

The school fundraising market was near and dear to founder Ken Rawlings who often hosted employee’s kids in after school activities. Children even experienced tours via a twin-engine vintage plane owned by the company.

You’ll find ‘No Funky Stuff’ in any Otis Spunkmeyer cookies. Made without artificial flavors or colors, high-fructose corn syrup, or partially hydrogenated oils, they’re synonymous with quality ingredients and superior taste. And with a shelf life of 10-60 days and clear labeling on every box customers can have confidence that what they are consuming is fresh baked.

Although the shift to ‘clean label’ has not come easily to many experienced food manufacturers  due to reformulating challenges, Otis has gracefully executed it while maintaining its great flavor. There is always a risk and reward with any sort of reformulation process. Many consumers are quick to write off companies due to a resulting change in taste.

Ever wonder where the calories in Otis Spunkmeyer chocolate chunk frozen dough come from? Well, here’s the breakdown. 41.9% from fat, 4.7% from protein, and 53.5% from carbohydrates. One chocolate chunk cookie has about 170 calories. You could burn that off in about 13 minutes swimming in a pool, 18 minutes jogging, 24 minutes cycling, and 45 minutes going on a casual walk. Not a bad trade for a fresh baked cookie.

Rawlings attributes the Otis name to his 12 year old daughter at the time who suggested a “quirky name”. Starting off in retail, the first store opened in 1977 in Oakland, CA. 2 years later they opened their first cookie dough manufacturing facility in San Leandro. By 1983 they had grown to 20 cookie stores but then decided to make the change from retail to wholesale and sold its stores.

By the end of the 1980’s, over 40,000 restaurants, delis, cafeterias, and hospitals were serving Otis Spunkmeyer cookies. Otis introduced retail frozen cookie dough that was first sold in grocery stores in 1990.

Brand expansion was the focus throughout the 1990’s after acquiring the Sweet Happenings muffin company and introducing Danishes and brownies in 1998. Otis was then acquired by a global specialty bakery company in 2006, now known as ARYZTA AG.

In 2015 Otis started selling its cookies, cakes, and muffins directly to consumers in stores throughout North America.

Probably best known for its chocolate chunk cookies, there are other delicious treats that they’re known for as well. Otis Spunkmeyer muffins are a mainstay and have been around since 1990.

It turns out that there are 5 characteristics that make for a mouthwatering Otis muffin, including fresh taste and moist appearance, visual inclusions on the crown and all the way through, and of course a variety of popular flavors that can be enjoyed anytime of the day. The most popular muffin flavor are the chocolate muffins.

Other Otis products include a variety of cake products like Cinnamon Streusel Coffee Cake, Mini Chocolate Cupcakes, and Frosted Golden Crème Cake along with brownies.

But if you still want to keep it simple and focus only on selling Otis Spunkmeyer cookie dough, you can’t go wrong profiting off the 8 most popular flavors on the planet.

The best part is you can enjoy a chocolate chunk cookie plain, as an ice cream sandwich, dipped in even more chocolate, or perhaps fresh baked into your mother’s delicious banana bread. No matter how you eat them, your taste buds will greatly appreciate it.