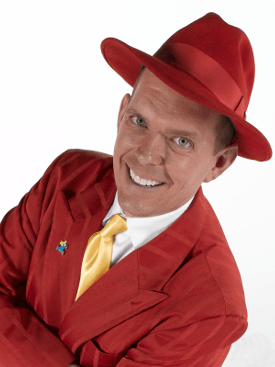 Doug Scheer is Michigan’s #1 elementary school performer. He is widely recognized as one of the country's top children's educational performers having won “Best Assembly Performer” by the KSGB (Kidshow Guru Braintrust) and is a featured lecturer to his peers at the international conference, Kidabra. His work has been published as the contributing school show expert in the national trade magazine "MAGIC" for four years and was even invited to perform at the White House in 2008. The Kidabra journal (the preeminent magazine for children’s performers) said this about Doug Scheer:

“Doug’s commanding voice and impish playfulness has endeared him to hundreds of thousands of kids and thousands of principals. He is a creative genius...who has taken the typical assembly show and elevated it to near Broadway standards.”

Doug Scheer honed his expertise over 16 years while touring throughout North America as a featured educational magician for Chevrolet’s auto shows. He's a highly sought after performance teacher and coach with an expertise in combining education with entertainment. His roster includes 11 different educational shows that are seen at trade shows, corporate training seminars, state fairs and have been in over 8000 elementary schools.