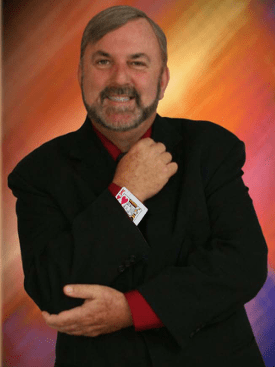 Eldon's career in magic began at the age of ten when he purchased a box of Cracker Jacks with a magic trick inside. This spurred his interest in magic, which later developed into a full time career. Eldon was named Magician of the Year by the International Brotherhood of Magicians, Ring 239. He has also appeared in his own television special. When not performing, Eldon lectures for magic fraternities, writes for magic publications and designs illusions for his company, White Magic Manufacturing, which creates props for magicians worldwide.

Eldon resides in Central Illinois but will perform wherever the event takes him. He has literally worked from coast to coast. Eldon says, "It's a lot of travel and some long hours, but there is no better job in the world."